You are here: Home » Travel Blog » Head in the clouds in Sapa

Head in the clouds in Sapa 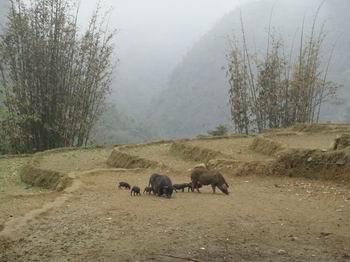 What an amazing place. Sapa travel, The only place I have seen to rival Sapa are Alie's photos from the Himalayas. While I know the elevation there is much greater this is the first experience I have had of being in the clouds. It really is quite special.

Before I get into Sapa a few notes on the second day of our journey. After our challenging breakfast we returned to the hotel room to put on our clothes still damp from the previous day. Why you ask. Well we left the big bag at our hotel in Hanoi which left us with the day pack. My clothes for the one week trip consisted of a pair of jeans, a pair of cargo's and three t-shirts. Even the toiletries were severely rationed in favor of medical supplies and a first aid kit just in case. Safety first when you travel with Mr safety ! So it was on with the damp clothes from the day before to save our clean dry set for our arrival in Sapa. While my morale took a little hit Dave kept me boosted with the promise of a spectacular ride and a hot shower in Sapa .

The ride from where ever the hell we were to Lao Cai started poorly with bucketing rain setting in 15 minutes after we left. Dave was having trouble seeing so we pulled over to wait it out. We stopped at a roadside electrical shop being looked after by two young guys. I could see their amusement but they were quick to offer us a seat and before you knew it I was drinking green tea with the boys while Dave was trying to clean the caked on mud from his shoes and jeans. The boys also drank tea and smoked a waterless bamboo bong. Yes I said bong which they also kindly offered to Dave (he politely declined). You can't complain about the hospitality of the locals. It was an interesting half hour. Within ten minutes there was again a crowd of around 7 locals and with Dave and I only knowing how to say hello and thank you in Vietnamese and they not having a scrap of English we still managed to have a few laughs.

Back on the road it quickly dried out and in less than two hours we were at Lao Cai, with only a 32km road between us and Sapa. We put off the planned break in Lao Cai and continued on to Sapa while the road was dry.

What an amazing ride. The climb was consistently steep and the scenery becoming more and more beautiful. About half way up we stopped to give the bike a break, Dave was worried about it overheating. We took the opportunity to get some amazing photos.

Sapa itself is a cute little town. The architecture still has french or European influences, Dave saying it reminded him of Switzerland only Hot . It took a little doing but we found our hotel, check out the view, and I dived into that promised shower and fresh clothes. The ride while hard at times was amazing and I feel as though we have seen and experienced a lot more. The interactions with the locals as we stopped every few hours for a stretch, a drink and a sunblock top up were priceless with many of them letting us into their homes to use the loo and freshen up. The Vietnamese can be incredibly kind.

Sapa itself is a great little town. Walking the main street we were quickly befriended by a group of three H'mong women. Very distinctive by their dress and rounded facial features. They are incredibly cheeky and have a great command of the English language.We were told with a smile that we had made new friends and we would be followed until we were ready to shop. It was delivered with such charm that we simply accepted that fact and chatted with them as we explored. It was funny as every time we stopped for a drink or a snack they would disappear only to reappear once we stepped back onto the street. There was one particular lady we were getting on really well with. her name was New (pronounced new with a little flair). Before long, as we had hoped, we were invited to her village for a visit and to her home for lunch the following day. After establishing a bit of a plan for the day we settled on a 9.30 pickup before being escorted home.